Best time of the year to eat Seafood

With autumn, the season to consume seafood begins, and the local markets are supplied with good quality products. Seafood is one of the most exquisite and healthy foods that we can find in Spanish cuisine.

Today I am going to show you the most common shellfish varieties in Spain, and when is the best time of year to consume them.

The shell is the most remarkable characteristic of crustacean shellfish. Considering this aspect, it is easy to deduce who belongs to this subspecies:lobster, crab, shrimp, red shrimp, spider crab, prawn and barnacle.

They are one of the most curious families in the marine world. They live on the seabed or attached to rocks, and the most popular are bivalves, which have two pieces or valves. In many cases, they do not have more than the shell to help move in the water. The moving is based on the impulse generated by opening and closing the valves. However, others use a muscular foot, such as the cockle. The most common are mussels, clams, cockles, razor clams, "coquinas", "Concha fina", oyster and scallops. The cephalopods are a subfamily of mollusc, so octopus and squid are considered as seafood as well.

There are other living things, even stranger, that are part of the classification of seafood. They are probably the most unknown. Not all echinoderms are edible or used in gastronomy. In this sense, the sea urchin is the most popular of its kind. 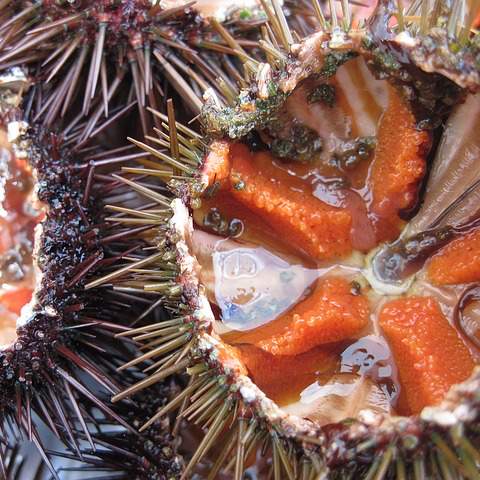 ‍
Fishermen say that the best time to consume seafood is during the months when the "R" appears, so from September to April, it is the most optimal time to savour these delicacies. However, each species has an optimal time for its capture, and therefore for its consumption, such as:

Shellfish have numerous advantages, such as the high protein content and the many vitamins and minerals they contain. It is also a product rich in omega-3 fatty acids. It prevents cardiovascular diseases, and for those most concerned with maintaining their line, these products contain very few calories.

Here you have some of my recipes where I used seafood as the main ingredient. I think you will love them:

So you know, you no longer have an excuse to try this delicacy. It's time to cook a good seafood platter.

Have a tasty day!

It is a pleasure for me to invite you to discover the best dishes and ingredients of Spanish cuisine. Receive my best Spanish recipes via e-mail

Latest entries of my blog

This week, I want to share a special vegan soup you've likely never heard of or tasted. This recipe is quick, easy, and inexpensive; you only need a selection of garden vegetables and hard bread from the day before as the original recipe.

The legend of the world's most dangerous hiking trail, El Caminito del Rey

After a busy Christmas with a lot of work in the kitchen, we start the year by taking some fresh air in this beautiful and impressive part of the Spanish geography. I have visited the Gaitanes gorge to show you one of the most incredible trails in Spain, called the Caminito del Rey.

Thistle with Almonds, a Christmas meal you may not know about

Christmas is approaching, and many people are considering what food to prepare for these special days to surprise and make their guests happy. And sometimes we are grateful for some ideas to cook a different healthy dish.

Learn how to make the traditional Spanish Pie "Empanada"

This week I return to the north of Spain to bring you another of its star recipes. This traditional dish, with countless versions, has been modified over time depending on each country's and region's typical products until it became what it is today.

This week I bring you one of my favourite traditional sweets. It is a fried dough ball made with flour, eggs, water, milk and butter, usually filled with whipped cream, custard, chocolate ganache or other creams or jams.

The most used spices in Spanish Cuisine

This week I am opening my pantry to show you my favourite spices. I will give you some examples and tips on how to use them to achieve a good balance of flavours in your dishes and make them successful.

The selection of these 12 old recipes of humble origin tries to show the more representatives products of my country. Enjoy!